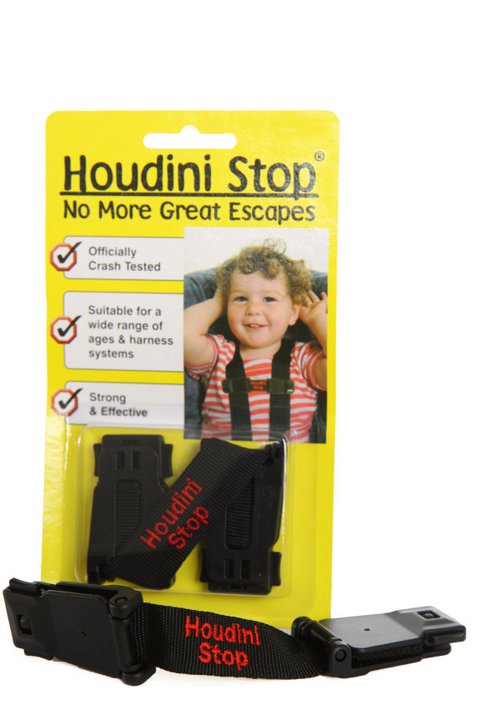 The Houdini Stop Chest Strap is a device which prevents your child from taking their arms out of their car seat straps. It consists of two simple clips joined by a length of material.

The clips connect to each of the 2 car seat straps and hold them closer together preventing your child from wriggling out.

It can also be used with highchair and stroller harnesses also, to prevent children standing up and possibly falling.

What size harness does it fit?
It fits over any single layer harness that is up to 38 mm wide

Is it safe?
Yes. The Houdini Stop chest clip has been crash tested at the Autoliv Test Facility in Melbourne, Australia. To the AS/NZS 1754  and 8005:2013 Standards. In short the Houdini Stop was found not to interfere with the performance of any part of the car seat. In all tests the Houdini Stop did not move up and have any contact at all with the throat area.

Is it legal?
Yes. The Houdini Stop is legally allowed to be purchased as an aftermarket accessory. The Houdini Stop has been officially crashed tested with and recommended for use with forward facing Type B car seats. It has also been  reviewed by ACRI an independent car seat safety organisation..

Will it work for my Houdini?
The Houdini Stop, has more than a 95% percent success rate. Most young children are not dexterous enough, or strong enough in their pincher grip to work the release mechanism. The Houdini Stop can not be made 100% inescapable, as an adult needs to be able to easily work the release in an emergency situation. Most children actually begin to love having a Houdini stop.

There are no reviews yet.

Only logged in customers who have purchased this product may leave a review.